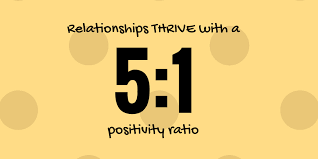 Following on from last week’s blog about positivity in language during hypnosis I thought this week we could delve deeper.

The positivity ratio worked out was 5:1. That means it takes five positive experiences (such as being affectionate, kind or interested in what is happening in each others lives) to make up for one negative experience (such as being hostile, critical, ignoring your partner or hurting their feelings).

Now if the positivity ratio was absolutely right is difficult to know but it does demonstrate the incredibly corrosive effect negativity has on our close relationships – and how much work we might have to do to regain that ground.

Gottman also rated the top four most destructive emotional reactions in a relationship are defensiveness, stonewalling, contempt and criticism. So you can see how easy it might be to use one of those – especially criticism.

Criticism is often a habit – something hypnosis is very good at dealing with – and we cause a lot of damage with this habit to our nearest and dearest – without even realising what we are doing. Many habitual critics are actually motivated by wanting to help their loved one. This is when we need to bring mindfulness to our behaviour. Criticising does not bring about positive behavioural change because it activates the other person’s defensive mechanisms. Another reason why people criticise is to gain control over the other person’s behaviour because their behaviour is annoying or irritating.

So what could be a lesson for us to take out of all this? Well, perhaps, understanding and awareness that negativity in relationships is very damaging and it will take more work to compensate for the damage it does.

Practising mindfulness in our relationships and doing some work around needing to control; thinking through habits of negativity and being alert to our impact on others can all be very useful starting points.